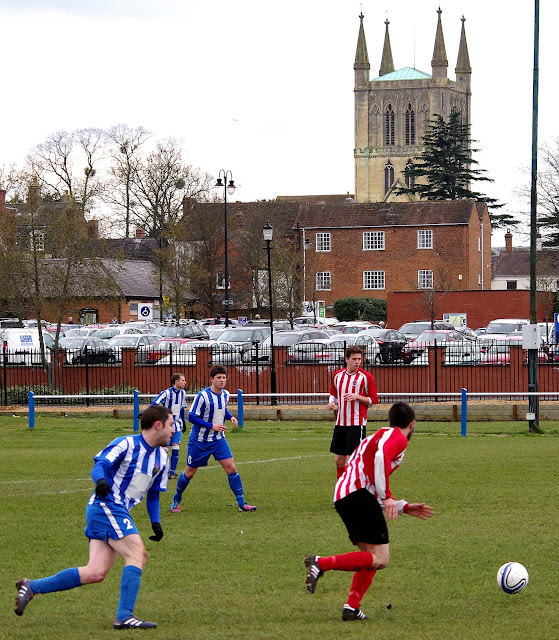 Here is a view from the ground with Pershore Abbey in the background.

I decided today to visit the King George V Playing Field ground of Pershore Town in their league game against Atherstone Town. Originally I had been looking to travel to Runcorn Town to see their FA Vase 5th Rd clash with Walsall Wood but after seeing the weather forecast with possibly poor visibility and likely snow showers, thought better of it. So in the end I plumped for Pershore and took the 20 minute bus journey to a ground I have not visited for 2 years.

Pershore is a pleasant place to visit and I had a quick look round the local shops and had a take away meal of burger and chips, eaten in the park with a good view of the 10th century Abbey.

The crowd was officially 33 for the visit of 3rd placed Atherstone and at least a third of these were supporters of the visiting team. The weather was cloudy and chilly but thankfully without any wind.

Pershore found themselves on the back foot for the first 5 minutes but it was they who took an unlikely lead through their No.9, Phil Marsh. 5 minutes later and the same player scored again!

So lowly Pershore had shocked the visitors and it made for a interesting contest. Atherstone continued to have most of the possession but Pershore looked dangerous on the break. Atherstone did reduce the deficit but Pershore struck again soon after, Phil Marsh completing a great first-half hat trick. 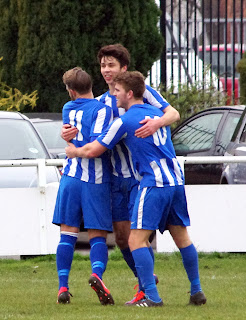 Phil Marsh (centre) is congratulated by 2 team mates on scoring his 3rd goal.

As the pitch is surrounded by metal fencing on 2 sides where people can view the game without payment, you get asked from time to time, what the current score is. I notice there is one young guy taking photos from outside the fence, while taking his dog for a walk. Very enterprising! 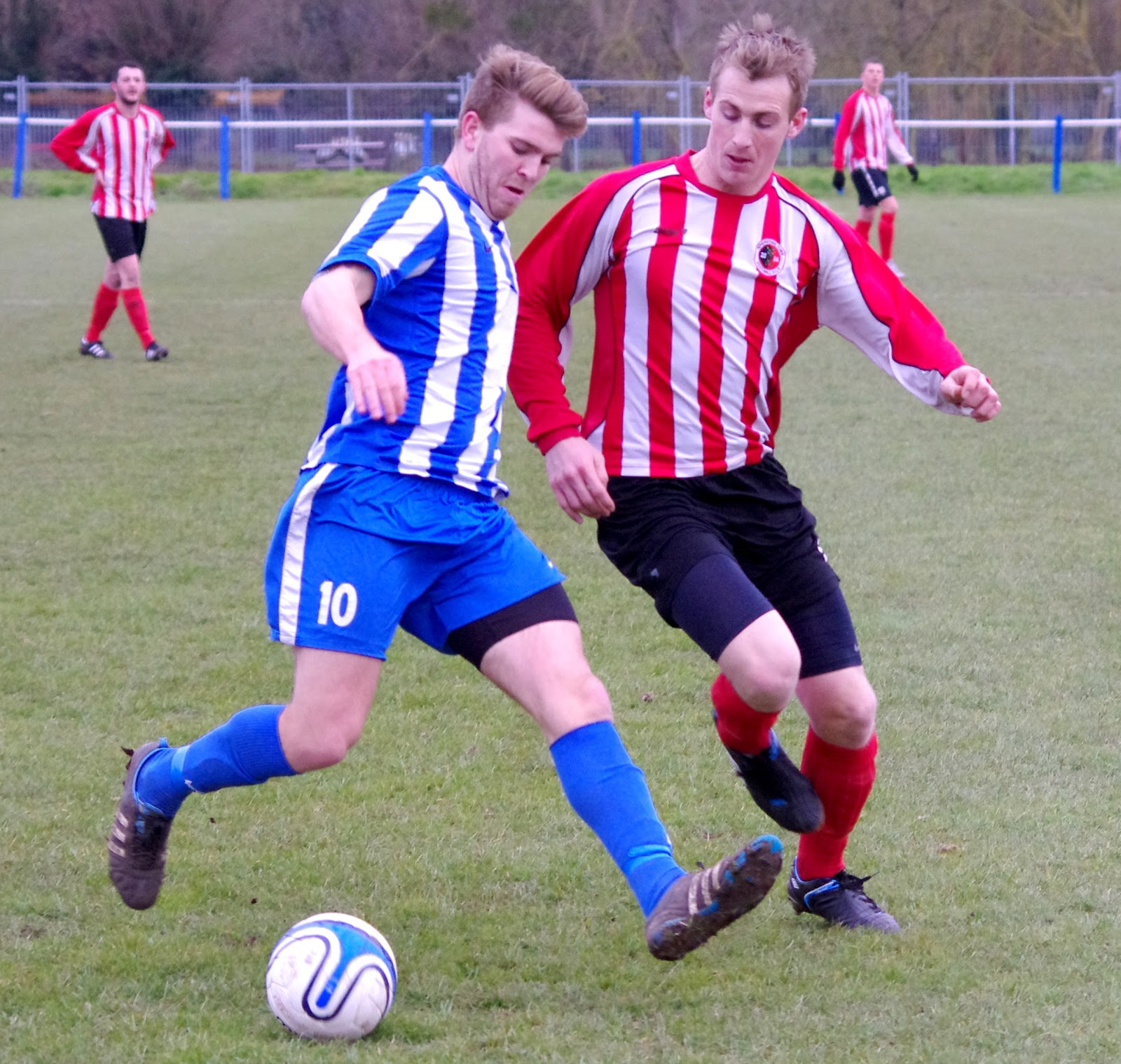 For the first 30 minutes in the 2nd half, the game is a more even affair but as it progresses, Atherstone press more and more in search of a vital goal. In stretching themselves, Marsh almost scores again. With 5 minutes to go I decide to go for the next bus home. Pershore are able to repulse the increasingly frantic visitor's attacks without much trouble. Pershore have played very well, while Atherstone have not been at their best. 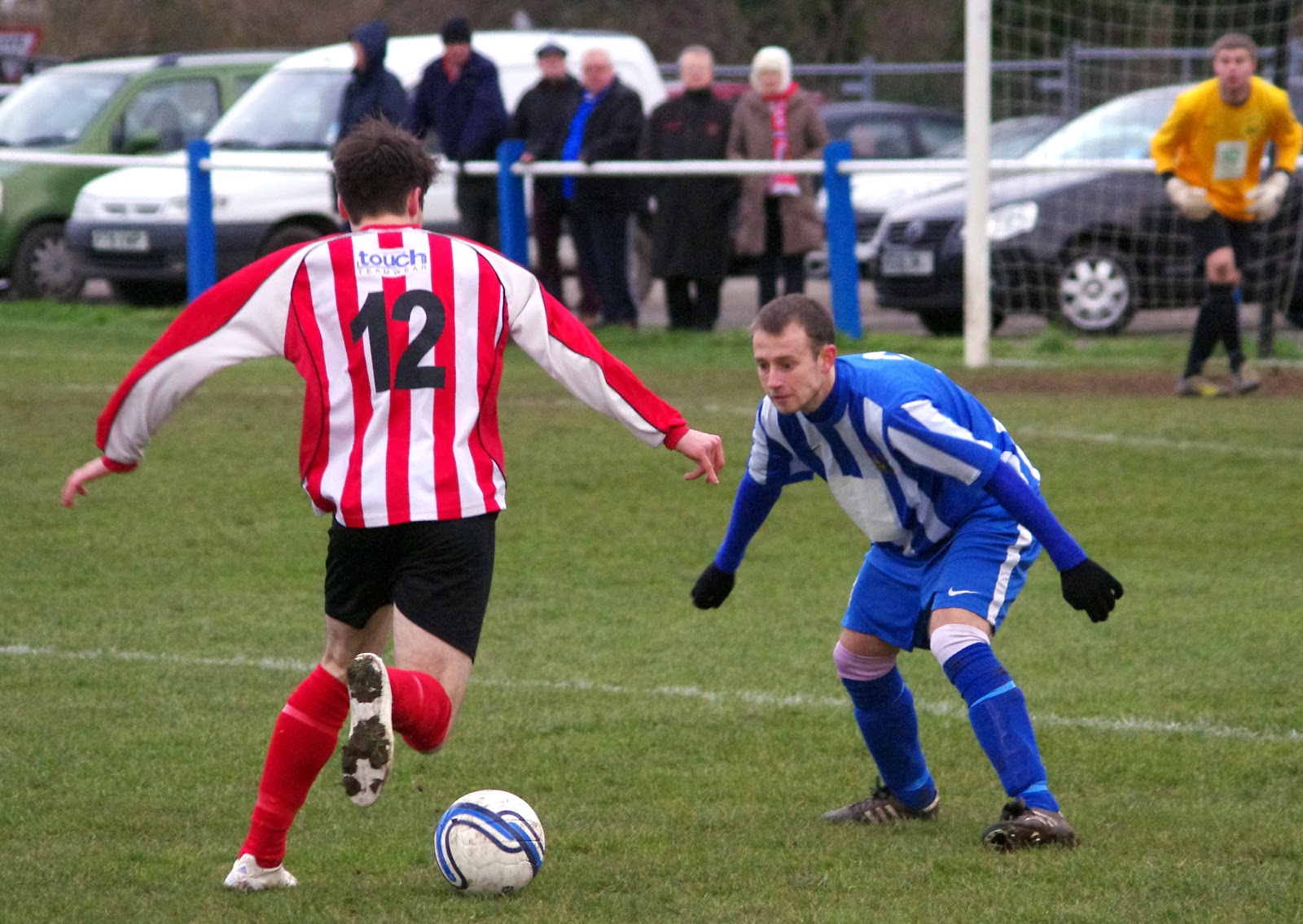 As a result of their defeat Atherstone have dropped down to 4th place from 3rd as Nuneaton Griff have an impressive away win at Brocton with 6 games in hand too! They, along with Walsall Wood, look like the likely champions at this stage. Pershore are unbeaten in 7 games now and their chances of survival look good.
Posted by Unknown at 14:19 No comments:

LEDBURY TOWN HANG ON AGAINST THE HUNTERS 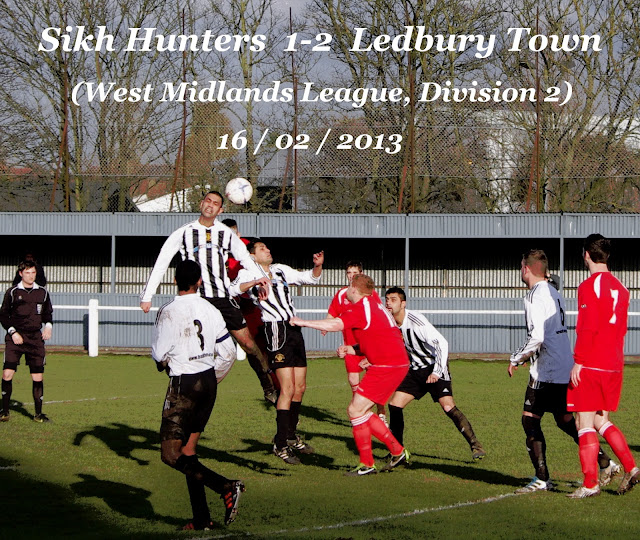 Today I decided to take in the West Midland League, Div 2 game between the Sikh Hunters team and the league leaders, Ledbury Town. I was glad to see the sun coming out while walking to the rail station in Worcester.

After alighting at Rowley Regis station at 1:30pm, I hurried to the town centre at Blackheath and had a quick meal at a local Cafe. I was hurrying because the West Mid League website, had informed me that it was a 2:30pm kick-off. However when reaching the York Road ground, I found out it was a 3:00pm start instead.

There were a small contingent of Ledbury supporters in the crowd, which looked to be around the 20 mark. It was a beautiful day and I was looking forward to the game, the first I had watched in this division. It was good to see Ledbury making a comeback in this league after a break of 2 seasons and I had wanted to visit this ground for some time, as I can see the floodlights from the railway each time I visit Birmingham on this route. It used to be used by the now defunct Oldbury Athletic team who played in the Midland Alliance. Now it is used by Sikh Hunters, (a club based in Walsall, founded in 1964) and share it with AFC Smethwick who are going strong in Division 1 of the same league.

Ledbury started the strongest of the 2 sides. Sikh Hunters seemed to be a bit off the pace and were being rushed in to making rash hurried passes.

Both sides, especially Ledbury had chances to score but the end of the half saw the score still at 0-0. 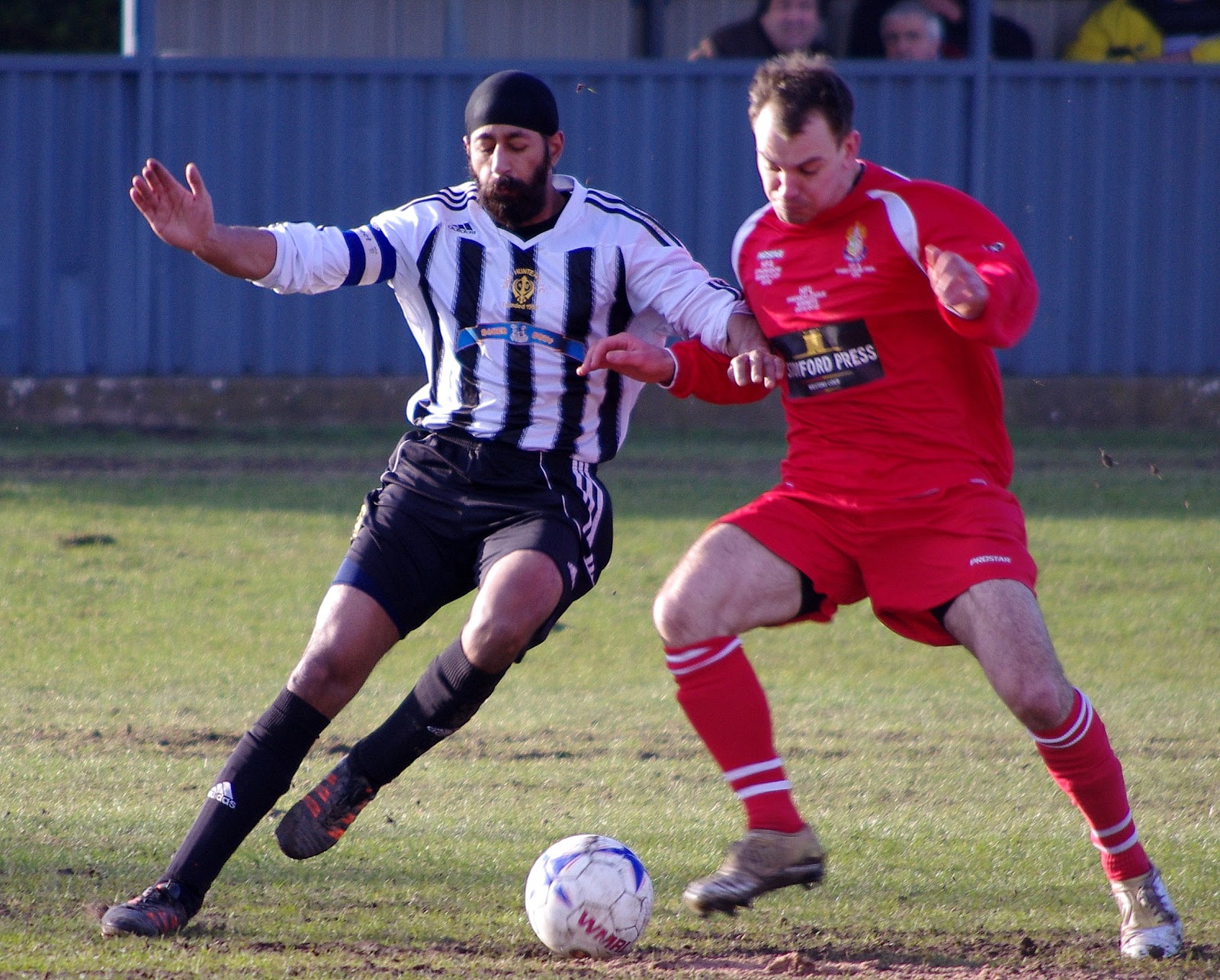 Sikh Hunters came out strongly in the second half and came close to breaking the deadlock but Pegasus were the ones to score first and repeated the feat five minutes later. 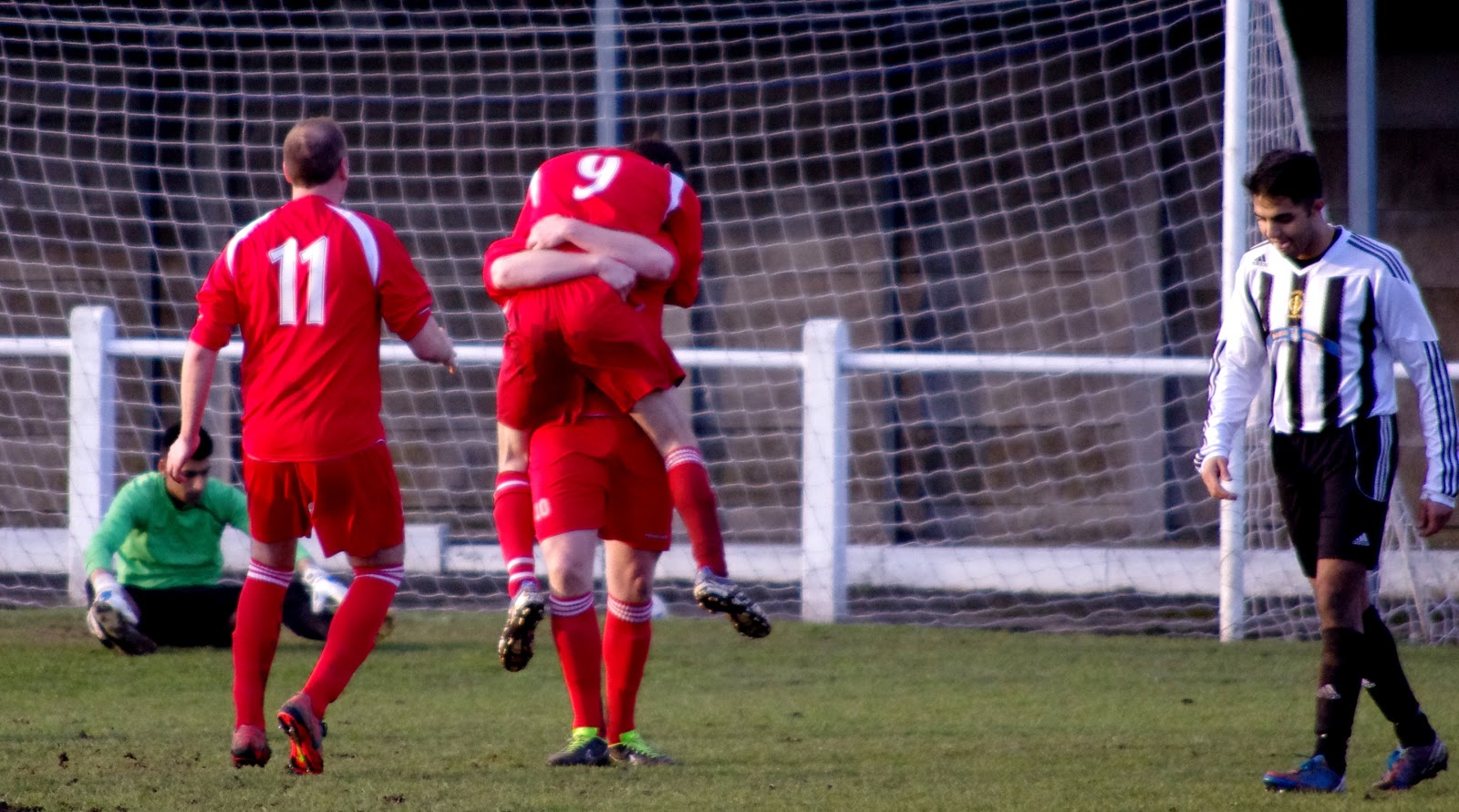 This photo shows the celebrations after Ledbury's first goal.

The Hunters however kept up their good football and were rewarded with 10 minutes to go when they scored directly from a free kick, taken out to the right of the Ledbury goal from a tight angle, deceiving keeper, Lewis Skyers. I am sure I saw Mr. Skyers playing for Pegasus Juniors last season, playing in their forward line!

The home side mounted wave after wave of attacks against the Ledbury goal...but to no avail. The leaders hung on for the win in an excellent open game of football, which was a credit to both sides. 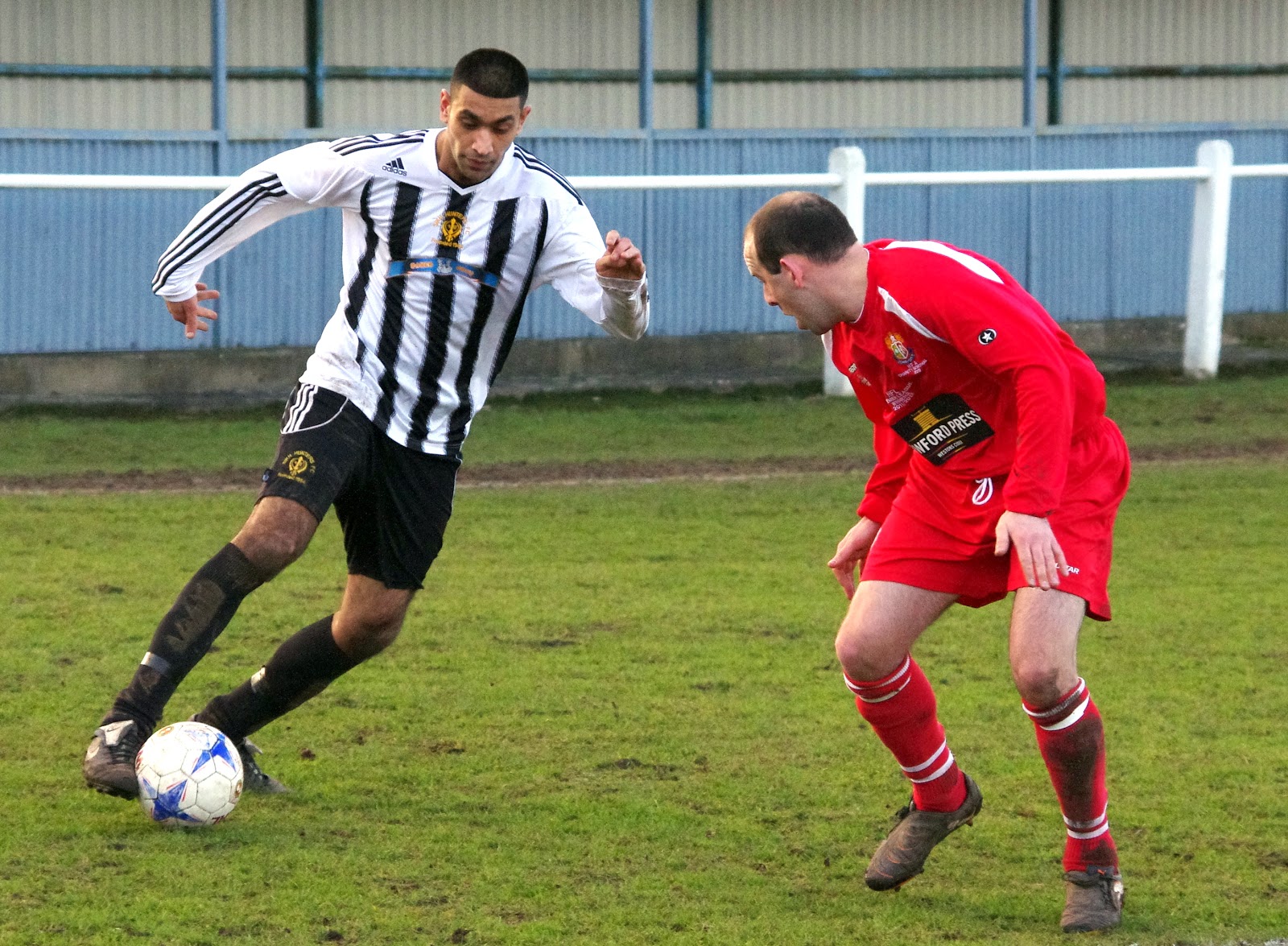 Ledbury kept their lead at the top and later must have been encouraged to hear that rivals Newport Town and Hereford Lads Club had both slipped to unexpected defeats. 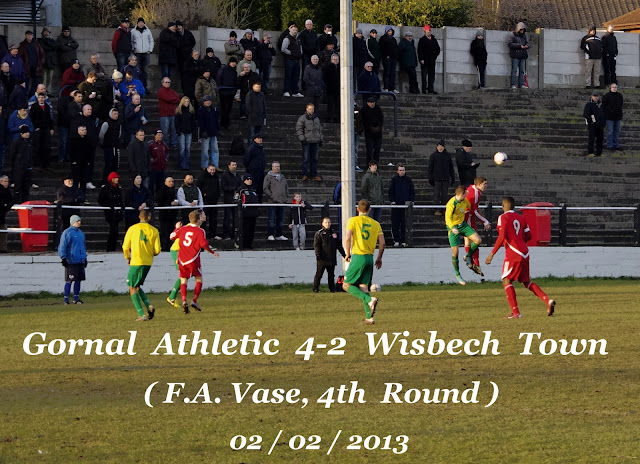 I took the train from Worcester to Stourbridge on a fine winter's day, which was good for the spirits after the recent weather. I had a good lunch at the Cafe Rimski , in the town centre. Recommend the food there for any 'Hoppers' passing through, good portions for a fiver, had Steak pudding,plenty of chips and peas, which was just the job on a cold day!

Took the bus from the impressive Stourbridge bus station and arrived in Gornal Wood, in plenty of time for the kick-off. Had been to this ground last season for their  last League game when Gornal won the West Midland Prem championship. Both teams are going well this season, so was expecting a cracking game.

Had the usual problem of the programmes being sold out well before 3:00pm but was given a team sheet a bit later by a very helpful club official.

There were plenty of photographers at this game, I reckon 7 altogether including your's truly. One of these was taking photos for the 'When Saturday Comes' magazine. He told me that he preferred taking photos at games like this as he could a have a good wander round the ground, rather than being hemmed in one small spot at a Football League ground. As a result of our little chat I decided to buy the latest edition of the mag and it's very professional too.
Met a husband and wife team of photographers all the way from Fleetwood and a Hopper/Photographer from Taunton too. 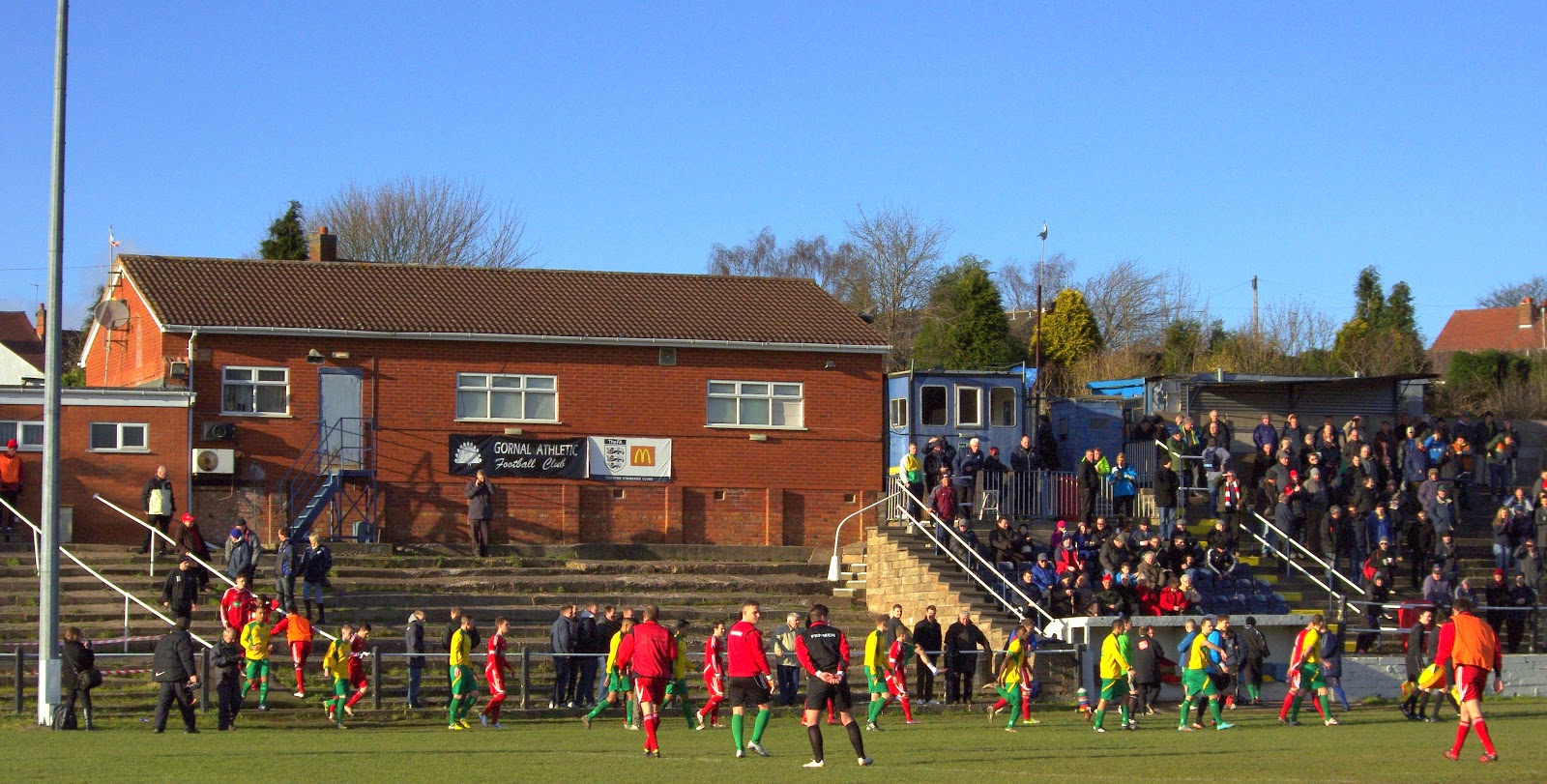 So at last 3pm arrived with the teams taking the trek down the terraces on the western side of the Garden Walk Stadium. Confusingly, Gornal were wearing yellow shirts, a la Norwich City, so now 'The Peacocks' had transformed in to 'The Canaries'! 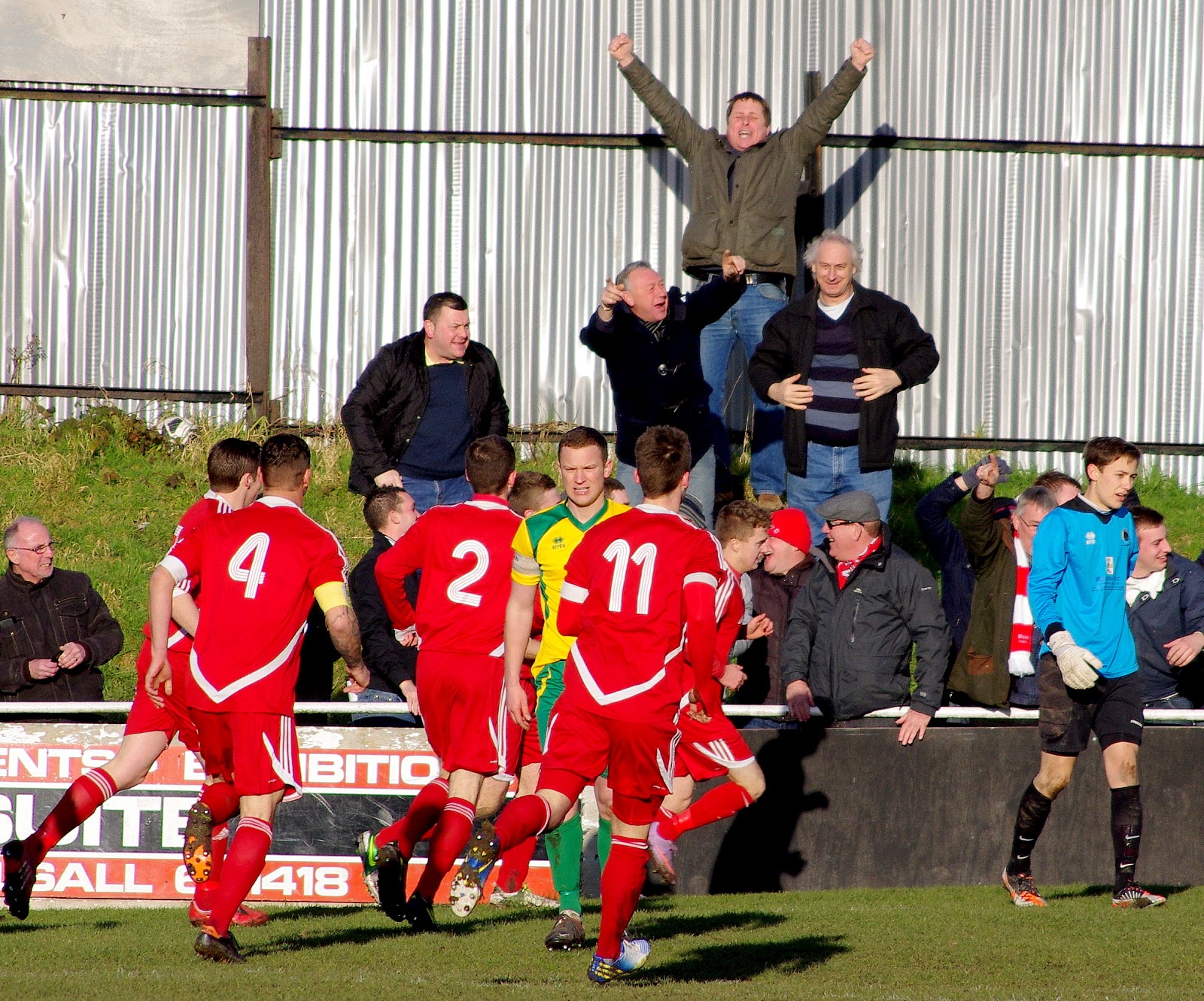 Wisbech hit the ground running and with help from the Gornal defence found themselves 2-0 up after just 6 mins! Above photo shows Wisbech's 'Red Army' celebrating their 2nd goal.  Gornal struggled to get back in to the game and their strikers were not seeing much of the ball in the first half. 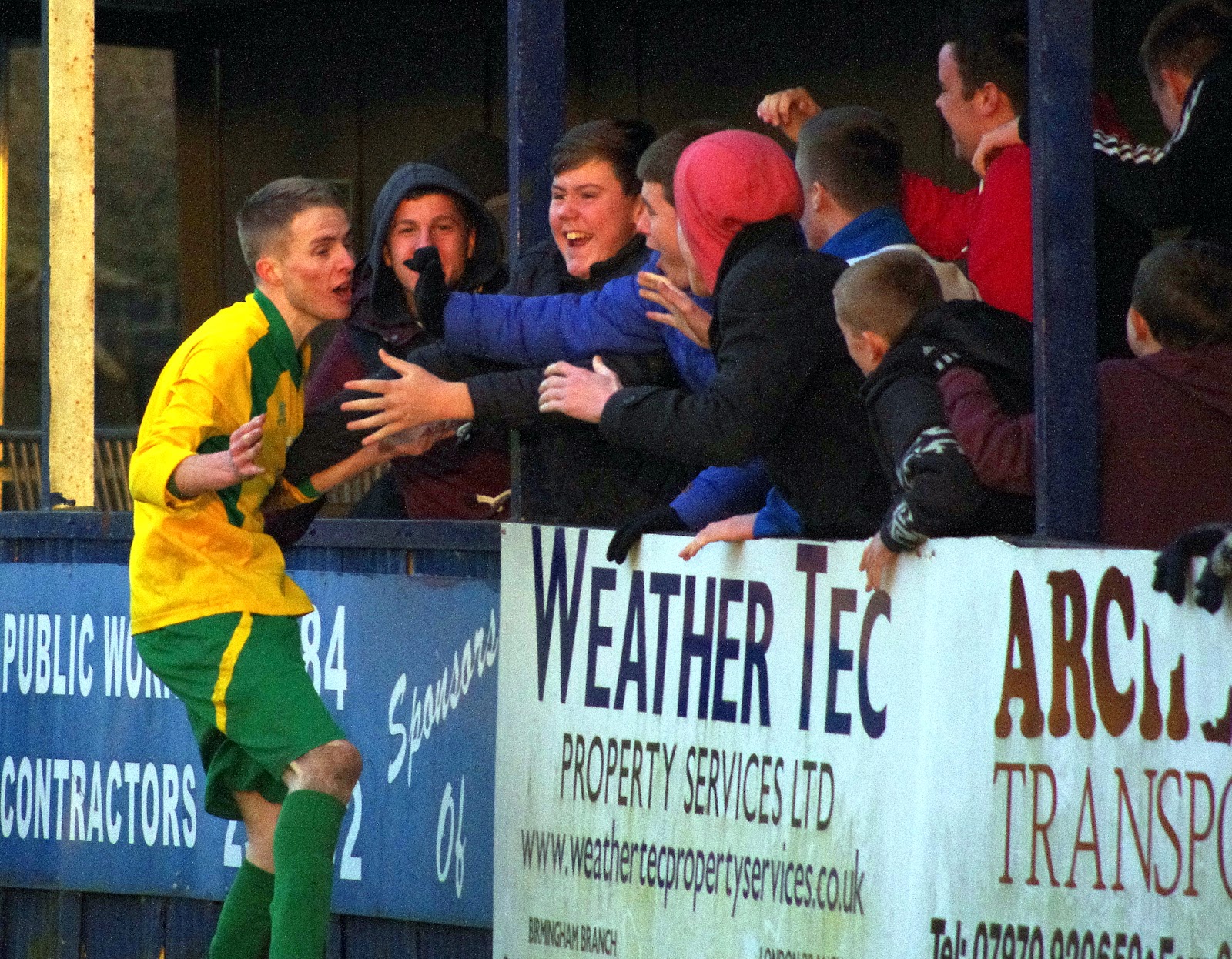 However an early 2nd half penalty raised the Gornal Athletic's players and spectators spirits....game on! Chris Rabone duly thundered in a shot from 25 yards and it was 2-2, seen here above celebrating with the young Gornal fans.

It was not a free flowing game of football by any means. Certainly competitive and quite niggly at times.

As the game wore on, Gornal were in the ascendancy as Wisbech visibly wilted but they held on till the end of normal time without conceding any more goals.

I had to leave to get my bus back to Stourbridge and as I left the ground, I saw a magnificent sunset develop in the sky in front of me.


Noticed the final score later on that evening on the Midland Alliance website and knew that Gornal Athletic would be continuing their Vase adventure away to Bodmin Town in the next round. 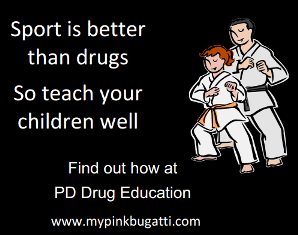